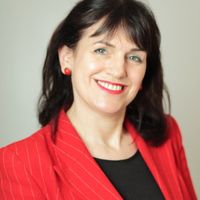 I have skills for leading change, but do I have the power?

The topic for week two of the School for Change Agents, which was broadcast live on 22nd February, was change agency. We define this as: the power, individually and collectively, to make a positive difference. It is about pushing the boundaries of what is possible, mobilising others and making change happen more quickly.

At the beginning of the live session, two polls were conducted. The first poll asked participants to rank themselves by how much experience, skills and/or confidence they had in leading change. Here are the results: 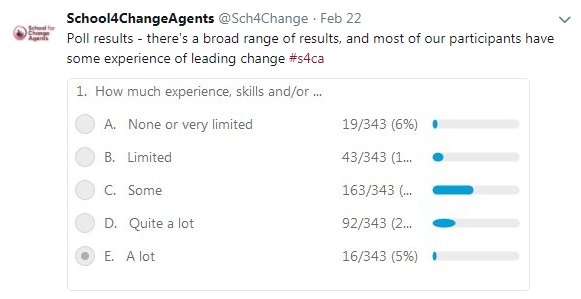 The second poll asked participants to rank themselves by how much POWER they have to make change happen:

Less people took part in the first poll compared to the second (343 versus 353) but we can draw conclusions from the results. Overall we see that the participants rated themselves more highly on experience, skills and confidence than they did on power, to a statistically significant level: 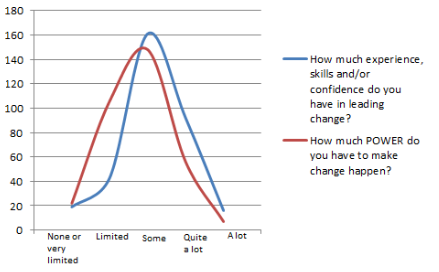 This is a situation we have seen before. Change agents often report that they have the skills and knowledge but are less sure about their own agency for change. Most of the training that is available for people who lead and facilitate change focuses on specific skills, methodologies and approaches. Change agents need this kind of development but on its own it is insufficient. If we utilise the definition of power suggested by Bertram Russel – “one’s ability to achieve goals”, then change agents also need to focus on building their own change agency in order to be powerful agents of change and achieve the results they seek.

Connected to this is the distinction we make in the School for Change Agents between DOING and BEING change (and again effective change agents need both).  DOING is about having the skills and methods to enable change. BEING is about the inner place from which change agents operate in the world and is demonstrated through their visible behaviours; how they build interdependencies with others, live with tensions and mobilise through values.

How to BE more powerful as a change agent

Here are three things to consider for BEING more powerful as a change agent:

1. Don’t assume that “old” (hierarchical) power is the best or only way to create power for change in your organisation or system

Change agents often make the mistake of thinking that they have no power to enable change because they work within a hierarchical system, or they are service users wanting to challenge such a system and they have no formal authority to make anything happen. In his context, it is very helpful to differentiate between old and new power, as described by Jeremy Heimens and Henry Timms: 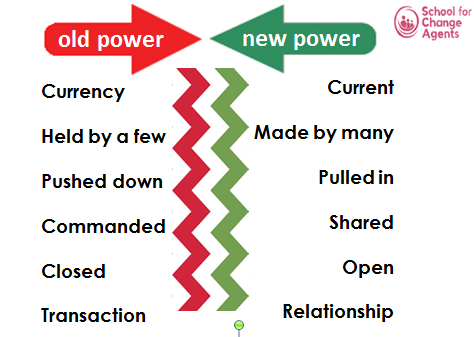 Old power is positional power in an organisation or system. In an old power world, the people who can make change happen are those with the authority to push commands through the system. Old power is like a currency; some people have a lot of money but most people don’t.  Largely, old power is transactional. People are held to account in a rational way for performance agreements and quality standards. By contrast, new power is like a current; it surges with energy when people come together with a shared purpose. The more that people participate, the more power is created. New power is relational; people engage in new power ways because they want to and it fits with their own priorities and values, not because they have to.

Grass roots change agents shouldn’t assume that old power is “bad” and new power is “good”. The most effective campaigns and action groups work with both kinds of power. If we consider the great social movements that changed the world, such as the women’s suffrage movement, environmental campaigners  and the civil rights movement, one characteristic they all share is that they were able to operate in what I call the difficult "zig-zaggy space" between old and new power. Change agents need to be able to operate with the levers and opportunities of both kinds of power.

Neither should we assume that old power outplays new power. People often say to me “I can’t make change happen. I’m only a staff nurse/student/junior doctor/middle manager”. Yet research findings suggest that, in terms of being an effective change agent, the extent to which a person is at the centre  in the informal network (new power)  is significantly more important than their position in the formal system (old power). In addition, people who are highly connected have twice as much power to influence change as people with hierarchical power. If we look at the reasons why large scale change projects fail to achieve their objectives, the reasons are complex and multiple. However, the failure is less likely to be about old power issues such as the programme management system, formal accountabilities and the structure of the plans that are put into action. Failure is more likely to be about lack of engagement with the informal networks that can make or break the change. If we want to make big change happen, we need to think new power as well as old power, connecting with networks of people who ‘want’ to contribute.

2. Consider where you are based in your organisation and whether your power is magnified or marginalised by your place in the organisation

The last time that my team, NHS Horizons advertised a vacancy for a senior role, 70 change leaders from the English National Health Service applied for the job. We analysed the applicants and found an interesting pattern. Most of the applicants held roles in healthcare improvement but they were positioned in what Henry Mintzberg would call the “technostructure” of their organisations. This meant they were positioned in technical advisory roles, away from the locus of organisational power, which is known as the “operating core”. 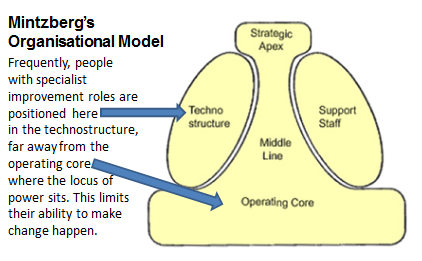 The reality is that however experienced or skilled these improvement leaders are, if they are away from the real power, they aren’t in a strong position organisationally to make much impact on the real work of their healthcare organisations.

So if you are part of a specialist improvement team or in a corporate improvement, innovation or programme management unit, you might need to work especially hard and reach out across boundaries to build the new power relationships and influences necessary for systemic change. It’s worth considering whether you can build dotted line organisational connections with teams in the operating core.

3. Think “marginal gains”: there are a thousand and more ways to build your own change agency

Gaining power as a change agent doesn’t usually happen overnight. You might suddenly acquire power because you are promoted to run a large scale change project with a big budget, or get elected to office, but even then you have to build trust, respect and relationships over a period of time in order to have real power for sustainable change.

There are many ways to build change agency. This is the sketchnote on the topic that was produced by my colleague Leigh Kendall for module two of the School for Change Agents: 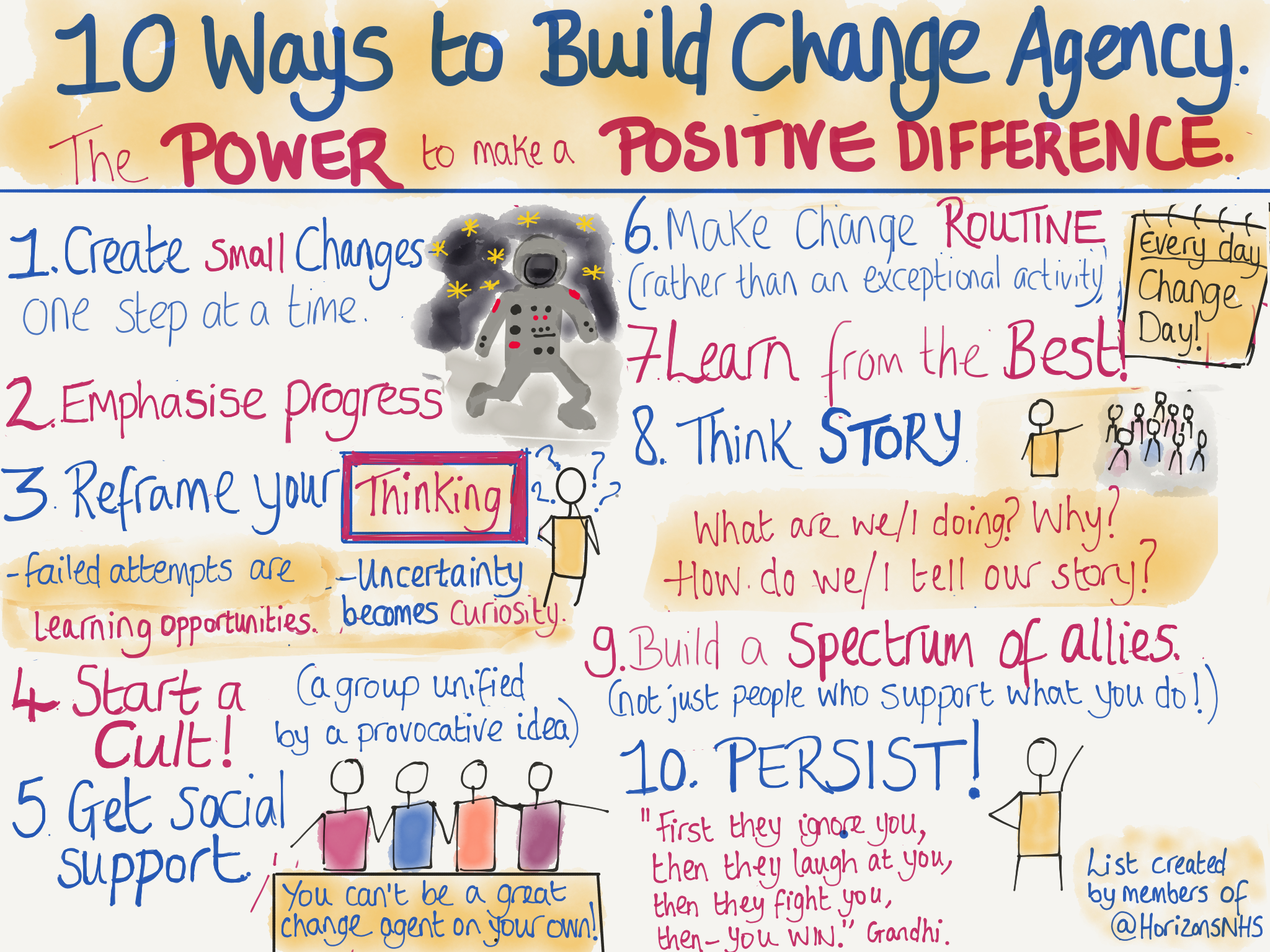 Leigh also wrote a blog explaining the methods for building change agency that are shown  in the sketchnote. You can read it HERE.

Just as marginal gains thinking has revolutionised elite sport it can help build change agency on a very big scale. We can build our own power for change by making small gains on many fronts simultaneously, underpinned by consistent visible behaviours that show people our values and goals for change.

There are two particular aspects that I would like to highlight. The first is to never underestimate the power of small wins. Sometimes when we are leading large scale change initiatives, we feel under pressure to make big things happen. Yet making small scale changes is one of the most effective ways to build a sense of hope, possibility and confidence, both for yourself and in other people. Being a change agent who makes even small things happen is far more likely to result in change agency than being someone who plans change and/or just talks about it.

The second aspect is if you want to build your change agency in a "new power" way, you must always, always following up on promised actions. To quote a wise Dutch proverb, “Trust comes in like a tortoise and goes out like a horse”. It takes a very long time to build the trusting relationships that are the foundations of  effective change but trust can be lost very quickly if promises are not kept or expectations are not met. If people give their time and energy for change freely in a new power world and they are disappointed, why would they choose to give it again? More than anything else, change agency is about building trust and maintaining it.

I hope that The School for Change Agents is meeting your expectations and helping you to ignite action and initiate small wins. There is still time to join the school (and catch up) if you haven’t done so already. You can sign up HERE. 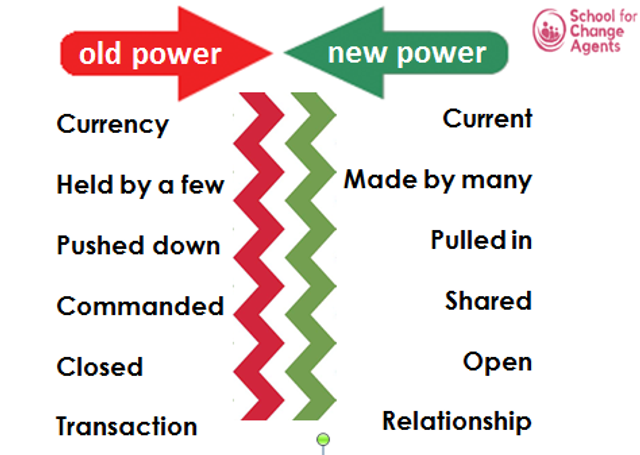 Finally got to catch up on module 2 of @Sch4Change. Fascinating concepts around making change without having ‘power’ to do so and the contributor and compliant types of people. #smallstepstobigchange #s4ca

What happens without conversation? Nothing. Conversation and transformation go hand-in-hand. Look at the conversation being supported by @helenbevan, @Sch4Change, and #s4ca participants as they build change capacity. Where there is conversation, there is new power for change. pic.twitter.com/E1kRmrga92

We don’t need luck to change things. We need each other starting with you. Tell us what you’d change in a Maternity operating room if you had no rules to follow #s4ca @Sch4Change @StGeorgesTrust @StGgas #Newbeginnings #magicalbirtheverytime pic.twitter.com/1LYelbEfCr

I felt the same last week ☺️ - It’s been great to share and connect because we all need to be heard and be valued. I’m finding #S4CA helpful at the moment who teach ‘how to rock the boat but not fall out’ x @rjwrm #RelayOfResilience

Change begins with me: module one of The School for Change Agents
Helen Bevan
Recent posts from NHS Horizons Insights