The Kardashian family has a huge global influence on television and across social media, with collective viewer and follower figures in the tens of millions. I have a modest number of Twitter followers (6,453 at the time of writing) - and for one event I became more influential than a member of this prolific family. 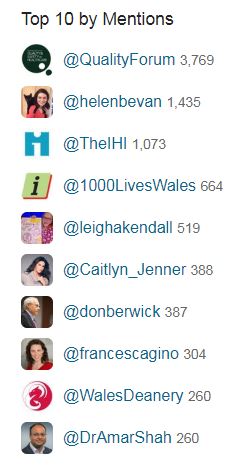 This is a screenshot from Symplur, which is a resource that tracks healthcare-related hashtags. The screenshot displays the top influencers of the International Forum on Quality and Safety in Healthcare, which was held in Amsterdam.

The column shows the top 10 by mentions. This means that these individuals and organisations were quoted the most by other people in tweets including the #Quality2018 hashtag.

My Twitter handle is @leighakendall - you can see that I was the fifth most influential Twitter account. Ahead of me are @QualityForum and @theIHI (the event organisers, with 11k and 38k followers respectively); @HelenBevan (Horizons' Chief Transformation Officer, 60k followers); and @1000LivesWales (who were at the forum spearheading a campaign about communicating quality improvement work - 7,547 followers).

The sixth most influential was @Caitlyn_Jenner, with a mere 3.86 million followers. Caitlyn Jenner, part of the prolific Kardashian family, gave a keynote speech during the forum about putting the person at the heart of healthcare relating to her gender transition. I created sketchnotes of her talk, which you can see here.

So how did I achieve this feat with my humble six thousand followers?

By following the 10 tips for social media success.

In my Twitter activity, I do my best to be authentic; I engage through having conversations, sharing knowledge, being curious; I try to add value. Want I want to be known for is finding creative solutions to issues; constructive challenge; and encouraging people to fulfill their potential, and I take every effort to make sure all my Twitter posts reflect this.

During the International Forum I had the influence advantage of being a speaker, with Helen Bevan, at two sessions (one on social media as a catalyst for spread, influence and impact; and another on sketchnoting and social media for impact). I was also the official sketchnoter for the forum. While this meant that I would be likely to receive more mentions on Twitter than a Forum attendee, during our sessions Helen and I encouraged our participants to tweet. We helped them to do this by sharing the event hashtag and our Twitter handles on a flipchart at the front of the room, and on our slides. I took the time to engage with everyone who tweeted content from our sessions, thanking them for attending, and answering any further questions they had. As a result of the engagement not only did I gain some really lovely additional feedback about my presentations, I've also built up my networks with some fantastic people, too. 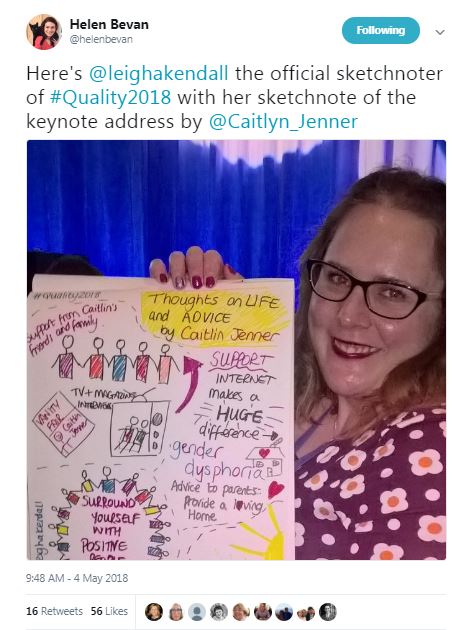 You don't need to be a conference speaker to be influential at an event. You could:

Why does all of this matter?

Twitter provides a powerful platform for enabling change in healthcare. Twitter transcends traditional hierarchies, and joins together diverse groups of people to learn and share together. We can often be caught up with statistics such as numbers of followers, thinking that more is always better. That unless you have a certain amount of followers your voice cannot be heard, and that you cannot be influential.

The #Quality2018 example shows that your number of followers is not directly related to your influence on social media. Far more important than your number of followers or number of likes and retweets you receive is how you engage with others; having conversations rather than broadcasting; being a generous partner; building your networks through learning and sharing. Think "so what, and who cares?" And never forget that power and influence on social media is different to in traditional organisations.

Be relational, be human...and, as Jenner herself promoted in her keynote, be your authentic self. 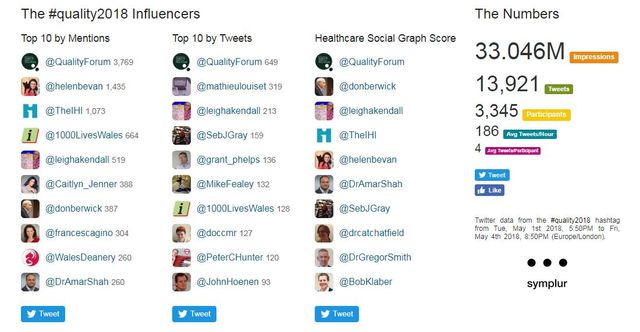 With Tweeting always think “so what” and “who cares”. Good tweeting is about quality and relations.....NOT number of retweets #Quality2018

Listening with fascination to @helenbevan and @leighakendall #Quality2018 'move away from hierarchy and make change happen through networks' pic.twitter.com/WsNoJRTTMB

Thank you ⭐️ @helenbevan & @leighakendall for such a fabulous session on the power of influencing on social media to start off Day 2 of @QualityForum
“The power of hierarchy is diminishing, the power of networks is increasing” 🌎 #Quality2018 #qfnhsengland pic.twitter.com/KMHyA4fu4n

#quality2018
This is great for all of us who want to be better at social media. It is an opportunity to influence. https://t.co/rNkZyRfVCW