Last week I had the privilege of attending the Public Sector Social Media Conference to hear my peers' experiences. Social media offers public sector communications professionals the opportunity to directly engage and have conversations with the people who use their services: and it's very cost-effective!

The presenters represented diverse organisations from across the public sector, and they shared in common a key theme: that effective social media management is about being human, and being brave, making genuine connections, rather than being a soulless robot sending out sanitised corporate messages.

Here's a sketchnote I drew during the day: 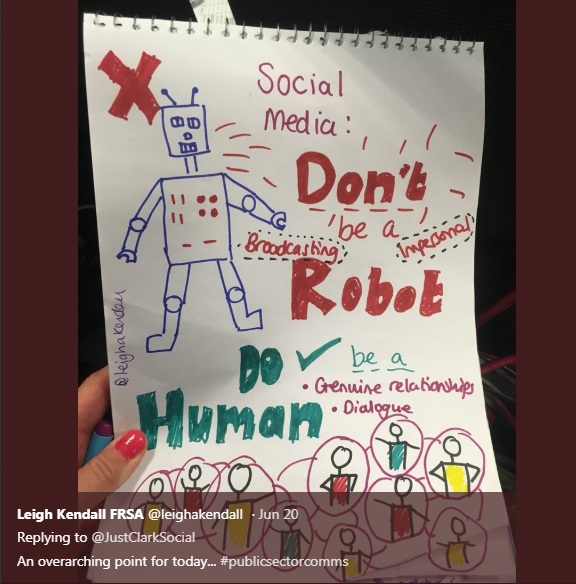 NHS Blood and Transplant (@NHSBT; @GiveBloodNHS; @NHSOrganDonor) do a brilliant job of information sharing, and engaging in dialogue - thanking people who have tweeted to say they've donated blood, for example.

Andrea Ttofa, Head of Organ Donation Marketing gave an overview of their campaign principles. They use a lot of user generated content to help people understand that ‘people like me’ donate blood, and are on the organ donation register. User generated content helps counteract slacktivism, which is where people use a hashtag in a post or simply share a post, thinking they’ve then done their bit but they haven’t actually taken any action. As an active campaigner slacktivism DRIVES. ME. MAD. But that’s a topic for another post.

In 2017, @GiveBloodNHS tweeted that more blood donors of black origin are needed, because many have a different blood type: this is important to help people with sickle-cell disease. At the time, about 1% of blood donors were black. After being accused of racism, the account responded with a fantastic thread to demonstrate that black people having a different blood type is simple biological fact, and nothing to do with racism. The thread included culturally relevant, funny gifs to help make the point along with science about blood groups and ethnicity. It went globally viral, and helped increase the number of black people donating blood. 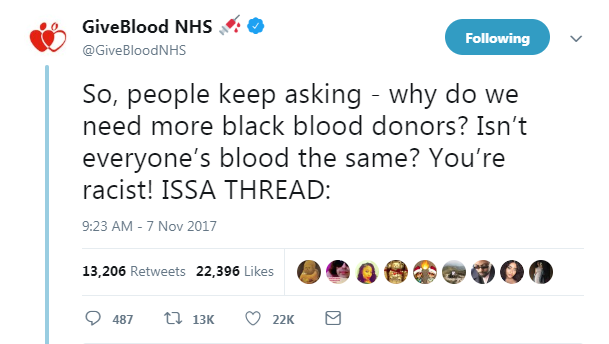 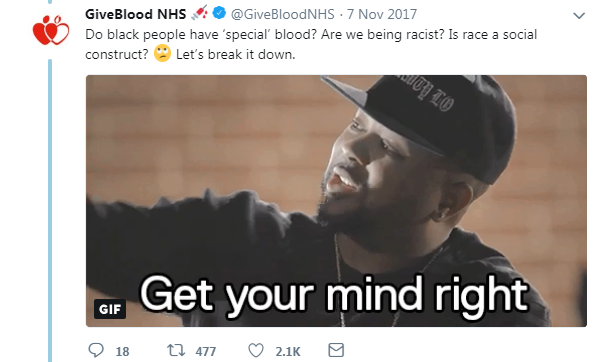 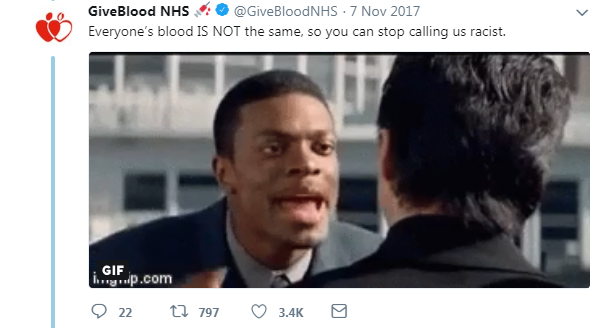 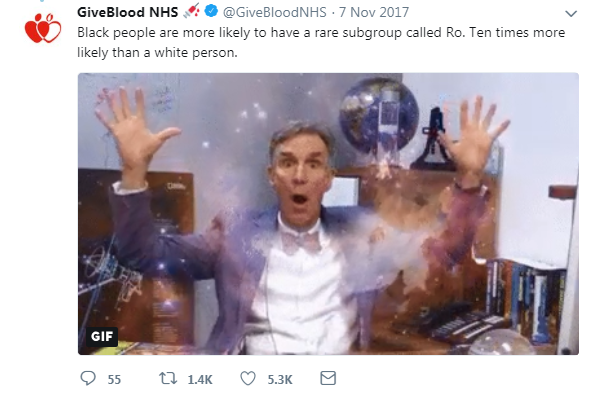 Tackling such a sensitive issue head on was incredibly brave, especially within the context of public sector comms that is traditionally risk-averse. The thread used language people could understand, and cultural references people could relate to. It was humorous, not patronising. The thread went globally viral. As a result, there has been a 72% increase in blood donations, and a 6% increase within the black community.

This approach achieved so much more than a standard press release

To my shame, I’ve donated blood only once, and as a recipient of a blood transfusion am now unable to donate. You can find out about donating here. I am however on the organ donation register – in the event of my death they are welcome to any or all of my organs that they would like. You can join the organ donation register here. Don’t forget to make your wishes known to your nearest and dearest as they also need to consent to your organs being used after your death.

Simon Enright, Director of Communications for NHS England spoke about the @nhs account, where people from all walks of life: professionals from all sorts of specialties, as well as patients living with all sorts of issues curate the account for a week each. 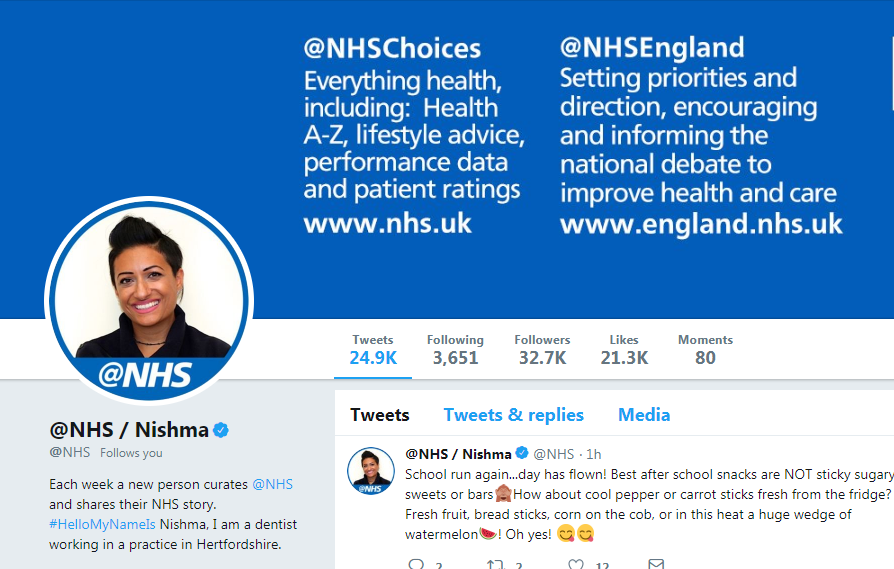 Handing over the reins to the account was a brave move: the curators are free to say what they want (besides the obvious caveats of defamation etc). The curators are able to describe their week in as much detail as they like, warts and all - which can mean criticism of the NHS.

The benefit of this risk-taking is enabling a corporate NHS account to show a very human side - and after all the NHS is all about humans! Curators are honest, open, and candid. Unlike traditional broadcast or print media, views and experiences are not filtered or sanitised.

As with all social media trolling is always a risk, and unfortunately @nhs has not escaped the attention of trolls. Happily, other Twitter users have leapt to the defence of the curator. The NHS is a trusted brand, loved and revered: and brave humans prevail. 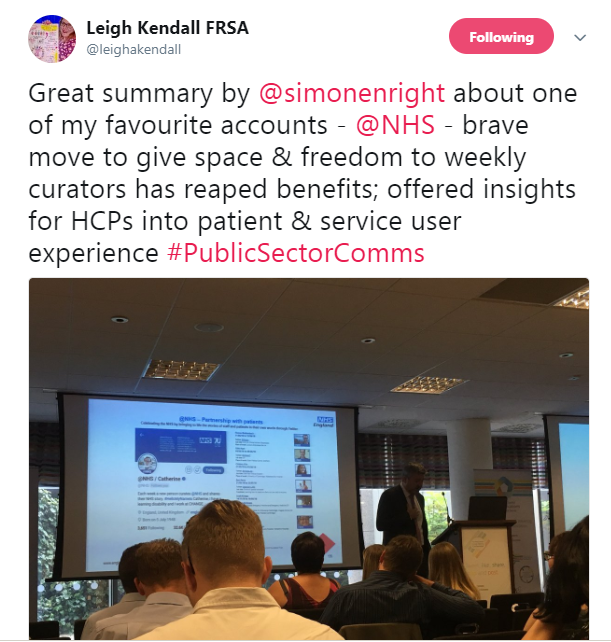 Justin Clark explained that the Transport for Greater Manchester Twitter account (@OfficialTfGM @MCRMetrolink) used to be managed during business hours – Monday to Friday, 9am to 5pm. The responses were very corporate and robotic, with no apologies for poor services. In the public sector there is an inconsistent understanding that you can be sorry for something going wrong, and the impact that it has had on someone’s life, without accepting responsibility for it.

There is now a team dedicated to social media, working during 6am to 10pm - hours more conducive to being responsive to the people using the transport services. The team has been trained to be human, responsive, and to have conversations.  They say sorry when there are delays or other issues, with an understanding that even if the issue is beyond anyone's control, problems with public transport result in massive problems with people's everyday lives. 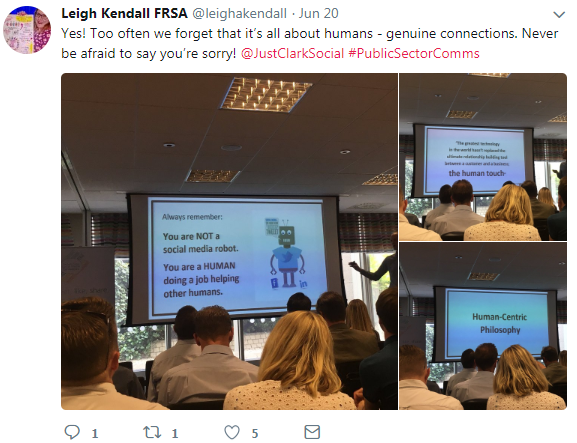 Crucially, the team shows their personality during their interactions - and they connect with Mancunian humour in their conversations. I loved the example of the exchange with a guy who’d tweeted to complain that a woman had stood on his brand-new trainers in her heels. Hopefully you can see the detail in the photo to appreciate the range of trainer brand puns. 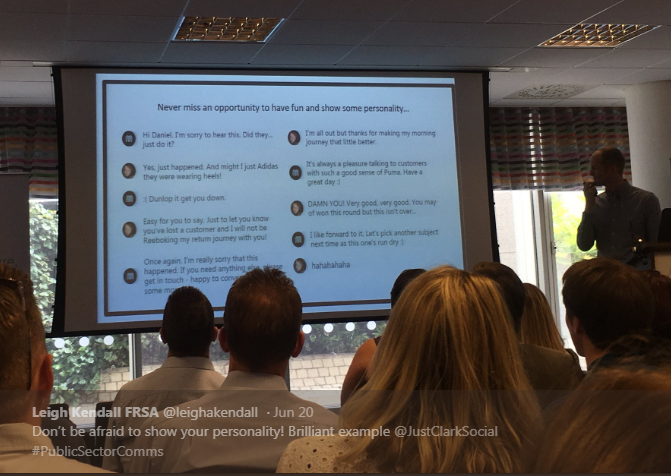 I'll leave the final word with this slide, which sums up the key messages so succinctly. 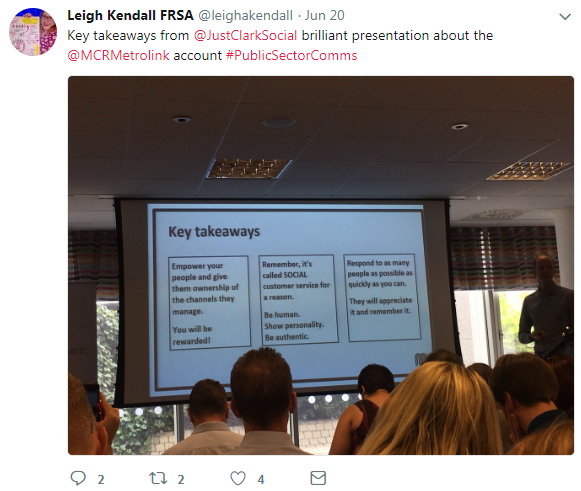 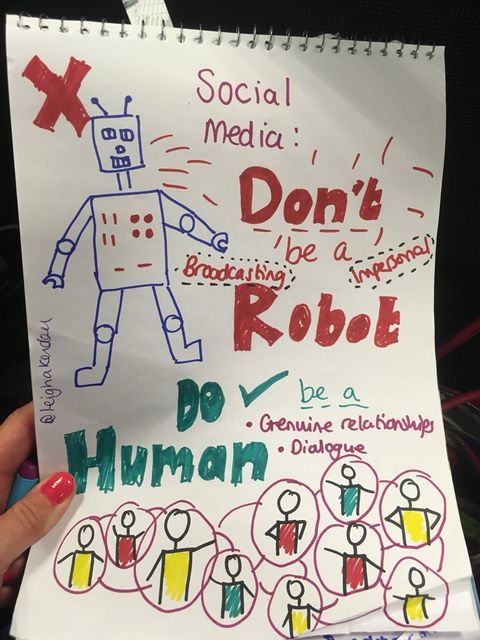 #PublicSectorComms @NHS wanted to build public trust and showcase the diversity of its workplace. So they allowed staff and patients to take over their Twitter channel 👌 https://t.co/8xAR1YA3zz

“Be brave with #socialmedia” is my favourite message from this morning’s #PublicSectorComms 👍🏼 pic.twitter.com/RqsYTvwNsJ

Amazing session from @ormygirl packed with great ideas and powerful messages #PublicSectorComms. If you can get involved and donate, please do @GiveBloodNHS @NHSOrganDonor

Be brave - absolutely love this message. I think public sector senior management are too risk adverse, we have to feel able to kick back towards those who attack us unfairly - if we are in the right then our reputation is not on the line. #PublicSectorComms pic.twitter.com/7indaZTu5M