I cannot name you all, but you know who you are. You looked after my son Hugo, born at just 24+4 and weighing just 420 grams.

You also looked after me, Hugo’s mummy and Martin, his daddy.

I shrieked the first time I saw Hugo. I couldn’t believe it was possible for a live baby to be so small, and so red. I was afraid I would break him. You encouraged me to open the incubator doors, put my hands in and touch my baby. I did, and Hugo instantly gripped my finger. It was the most amazing moment, one I shall remember as long as I live. I loved that Hugo knew I was his mummy, even though we had been separated for more than 30 hours.

Hugo could be a right little monkey. I couldn’t believe how much mischief a baby who weighed the same as a tin of baked beans could create. Hugo knew what he wanted, and when he wanted it. Whether it was to be placed on his tummy (his favourite position), his feed, or a clean bum he wanted it now, thank you.

You called him Hugo Boss. He was the boss. I loved that you gave him a nickname.

You knew all his ways, what he wanted and how he liked it. We were all happier when he was happy.

Hugo was small, and very premature. His outcome was always uncertain. You were honest yet hopeful, while never giving us false hope.

You taught us to make the most of every day with Hugo. To take photos, to sing and to read to him. To touch him as much as possible.

You always took time to explain things, and there was never such a thing as a silly question.

You encouraged me to keep expressing my breast milk – the breast milk that Hugo loved so much.

You did everything you could to help us, especially as we were in a hospital far away from home. We knew you were always there for all of us.

You knew that once Hugo settled in to his skin-to-skin cuddles, he loved them. You left us to cuddle for as long as we liked. They were our favourite moments. Our skin against his skin, feeling his little feet kick our chests, his little hands tracing our skin (or grabbing his dad’s chest hair).

You encouraged us to rest, to take care of ourselves, so we could look after Hugo.

You tried every possible treatment for Hugo. You knew Hugo had a lot of fighting spirit.

The results of his blood gas tests were always met with great interest, and you always hoped Hugo would give a good number. A good number was greeted with joy.

There was one nurse who was so focused on her excellent skills that she forgot that being a good nurse includes being kind. She made me feel like I was in the way, an encumbrance, and refused to facilitate Hugo having a cuddle. Hugo died the next day, and I still regret the 'lost' time with my boy. I am grateful to her colleague who saw the tense relationship between me and the nurse and tried to intervene - she offered me a hug as compassionate support.

When it came to the end, you were frank and honest. You were compassionate, concerned for my wellbeing during the epic three hour cuddle I had with Hugo after the decision was made to withdraw his treatment: you bought me food from the hospital shop with your own money.

There are certain things I would rather not remember, to erase from my mind. There were decisions we did not want to have to make. But we are glad if this had to happen, we were able to be good parents to Hugo, to help him pass peacefully. To let him do what he wanted when he wanted to do it in death as well as in life. For him to die in his favourite place, skin-to-skin on my chest, listening to my heart beat.

Thank you for letting me change his nappy for the last time. To let me dress him in a little babygro for the first – and last – time. They are treasured memories.

We knew how much you cared for Hugo when you came in to the room to say goodbye to him. Many of you had tears in your eyes. It touched us to know that Hugo Boss had touched you, and that you were sorry his fight was over.

You have your favourite Hugo stories – this was a tiny boy with a huge personality. Stories of when he would ding his alarms to get what he wanted; how you would never forget how his blood pressure magically increased when I appeared on that terrifying night we first met; saying how astonished you were at how his saturations would increase when I sang to him; when he would open his eyes to peek at you.

So few people were able to meet Hugo in person, and it means the world to me that you cared for him so much.

With love and everlasting gratitude,

For the Perceptions of Nursing and Midwifery July Blogging Challenge 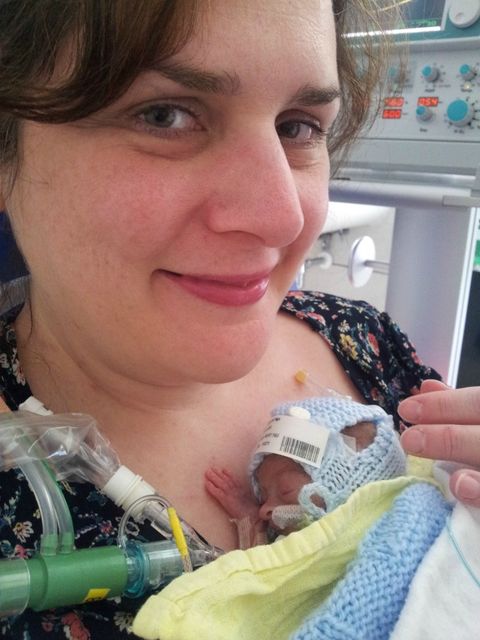