This browser is not actively supported anymore. For the best passle experience, we strongly recommend you upgrade your browser.
All Posts
September 27, 2019 | 3 minutes read

Midwives have a significant contribution to make in delivering 21st Century care as set out in the Interim NHS People Plan. Much depends on our ability to mobilise and engage midwives to play an active role in shaping the future, creating a workforce that positions midwifery as a high-status, high-value career of choice.

Our Chief Midwifery Officer Professor Jacqueline Dunkley-Bent has set #PerceptionsOfMidwifery as a key priority going forwards as described in this message to ambassadors.

Background to Transforming Perceptions of Midwifery

Transforming Perceptions of Midwifery was originally launched in January 2019 at an accelerated design event facilitated by NHS Horizons. 76% of attendees were midwives, with the remainder in associated roles attending for the day as “critical friends”. The event was livestreamed to a further 5,257 participants via The Practising Midwife Facebook Group.

The objectives of the event were to examine the perceptions of midwifery held by those in the profession, of health and social care policy makers, of the media, service users and of those who may plan to enter the profession; to inspire the enthusiasm of those attending and empower them to become change agents in their own work settings by becoming Ambassadors.

The next steps for the work will focus on developing the midwifery ambassadors to:

The role of the ambassador is:

The role of the ambassador is to lead or contribute to the local delivery of the Transforming Perceptions of Midwifery programme and to be a role model for midwifery as a confident, credible professional.

Midwifery ambassadors help to raise awareness of the profession across the following key areas:

The specific responsibilities of a midwifery ambassador are: 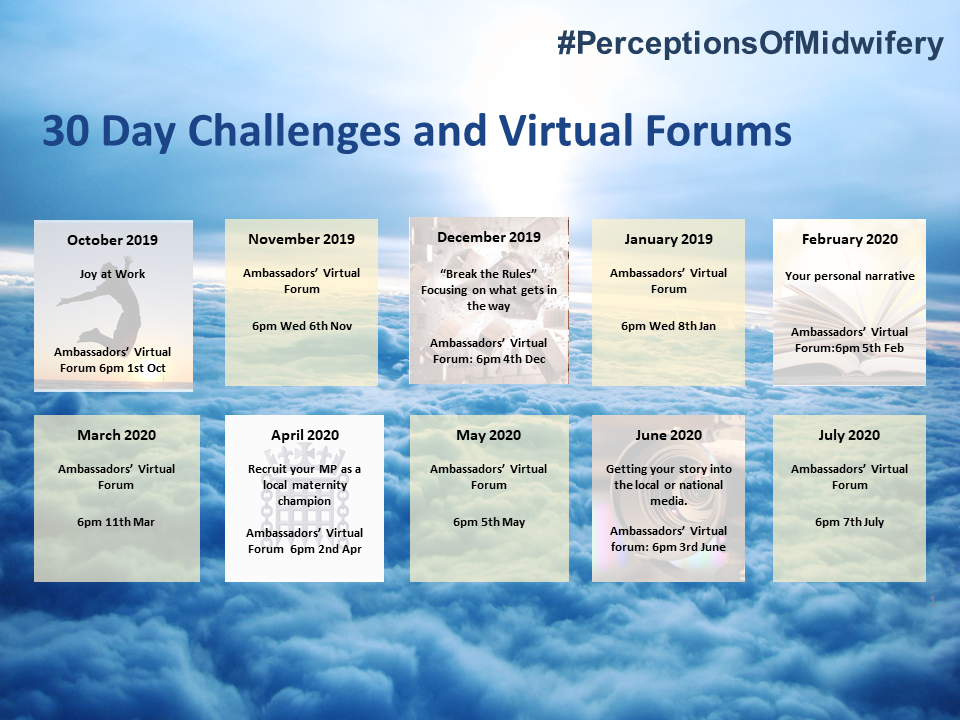 Who can be an ambassador?

Any registered midwife or student midwife, at any age or stage of their career, working in any NHS or University setting, who is:

What training and support do midwifery ambassadors get?

Ambassadors get the opportunity to take a leadership role in a nationwide programme of 30 Day Challenges. They are able to link up with other midwifery ambassadors from across the country and have learning opportunities which can be included in revalidation portfolio, including:

How do midwives become ambassadors

Existing midwifery ambassadors have been send information to confirm their role and to support them with gaining sponsorship from their local maternity service senior leaders – there is still time to return these forms! Do let me know if you haven’t received anything by emailing me at Bev.Matthews@nhs.net. Services currently without ambassadors will be offered the opportunity to identify up to two inspiring midwives to join this national network.

I feel privileged to be working closely with NHS Horizons to lead this exciting work to proactively enhance the public perception of the midwifery profession, through an improved representation of the role of the midwife through the media, empowering and motivating midwives to increase morale thus retaining them in their roles while showcasing midwifery as a career of choice and grow our future workforce Claire Mathews, Deputy Head of Maternity NHS England and NHS Improvement 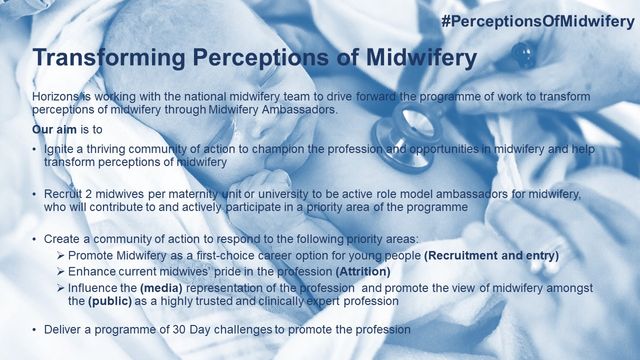