You might have noticed that Twitter has recently started giving people the option to choose who is able to reply to their tweet. The feature has been tested by a small number of users since May, and was rolled out to all Twitter users last week.

(Note: Any accounts you have blocked will still be unable to read your tweets, or reply to you. Also, if you've protected your account, only those whom you have permitted to follow you will be able to view your tweets and respond to them.) 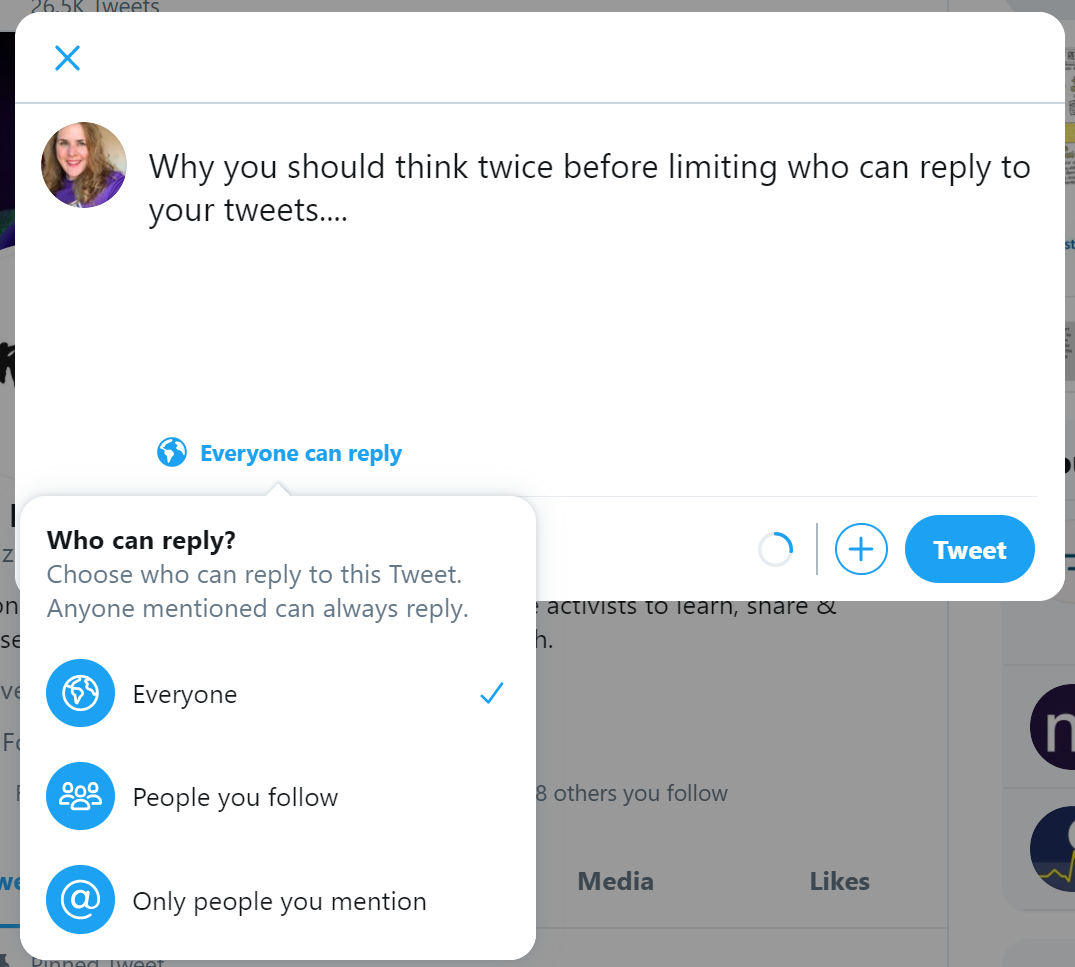 Twitter is marketing the new tool as a means of "helping people feel safer tweeting, and have more meaningful conversations."

I can see benefits to the feature: for example, unfortunately trolling remains an issue for the platform. People who are regularly targeted by trolls often feel the best option for them is to leave Twitter, meaning they may lose out on connections and support from genuine people. In such a situation, the ability to choose who is able to reply to their tweets is likely to help them to feel safer.

However, on the whole there are more potential disadvantages to the feature being used.

The most significant disadvantage is the creation of echo chambers. An echo chamber is where views and opinions of people who think alike are reinforced and amplified within a social media bubble (in its simplest form: "Well everyone I know thinks like me, therefore I must be right!"). While it's human nature to want to surround ourselves with people who think like us, and will agree with us, it's really important to have diverse conversations and a spectrum of allies.

The huge benefit and beauty of Twitter is the ability to have open conversations with diverse groups of people, and to build our networks. Those open conversations can often be with people you might not have the opportunity to meet in 'real life' - you can mutually benefit from sharing your views and experiences.

Some of the most beneficial (and enjoyable!) Twitter engagements I've had have been by stumbling across a conversation, or someone I hadn't followed responding to a tweet I have sent. Limiting replies would make such serendipitous connections impossible - and limit the potential of using the platform not just for building our networks, but for learning and spreading knowledge.

Sometimes people confuse others disagreeing with them as being 'trolled'. See this post for advice on telling the difference between genuine debate and being trolled - and what to do if you really are being trolled.

Twitter can sometimes feel a bit overwhelming, especially if you follow lots of accounts. A better way of making it feel easier to manage than limiting replies can include setting up or subscribing to lists. You can also mute hashtags, users, and conversations. Means you still have wide access. 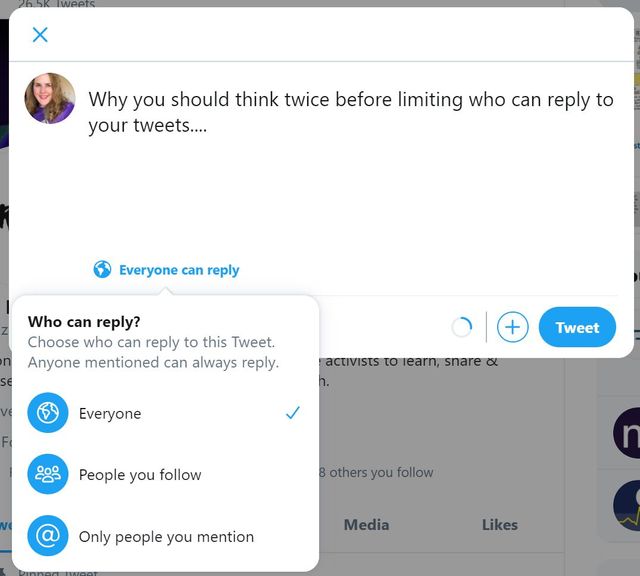 Interested to see how this new way of curating @Twitter conversations will work, I get that people may want more 'meaningful' conversations but I'm torn about how much it'll increase the echoes in the chamber 🤔 pic.twitter.com/irrDtM8MnO

…if we limit who can reply to us, it creates a closed network.

In my opinion, it flies in the face of what Twitter is founded on: open conversations.

At the same time, I enjoy curating my conversations. I fear that I’ll miss new insight and perceptions.

It's just another tool for people to use when curating their personal echo-chamber.

Really starting to verge into blackpill territory when it comes to Twitter these days.

It appears to be breaking down our ability to have nuanced conversations with each other...

This new conversation experience is here for everyone! When composing a Tweet, tap “🌎 Everyone can reply” to change who can reply.

We’re just getting started with features to help you feel safer Tweeting and have more meaningful conversations. Details: https://t.co/gWspbKs5SG pic.twitter.com/K0VLQ09ikP