This browser is not actively supported anymore. For the best passle experience, we strongly recommend you upgrade your browser.
All Posts
June 25, 2021 | 8 minutes read

Personas as a tool to understand #OurNHSPeople

I've recently been working with the National Workforce Retention Programme to develop a series of personas to better understand our people and their reasons for choosing to stay in the NHS, or leave.

A persona is a fictional character based on data and interviews to demonstrate the values and attitudes that drive the behaviours of a group of users - in this case our NHS People. Often used by big brands who want to reach new customers or make more money off their existing ones, a persona is not meant to be representative of all users instead it will summarise "typical" users by identifying significant values or beliefs that a group of users hold. When developing personas it's vital to set aside what you think you know about your group/users to avoid stereotyping or bringing in bias. Below is a brief guide to developing personas even when time and resources are limited.

Look at the data you have available, it will give you a place to start. Staff surveys, workforce data and academic research all indicated to us that the most groups most "at risk" of leaving their role were at an early stage in their career (which we defined as having been qualified in the last three years), and those in a later stage of their career, typically aged over 50 and beginning to consider their options for retirement. This quantitative data is very useful but it doesn't really help us understand why they are at risk of leaving - to understand that you need to have conversations with people in those groups. 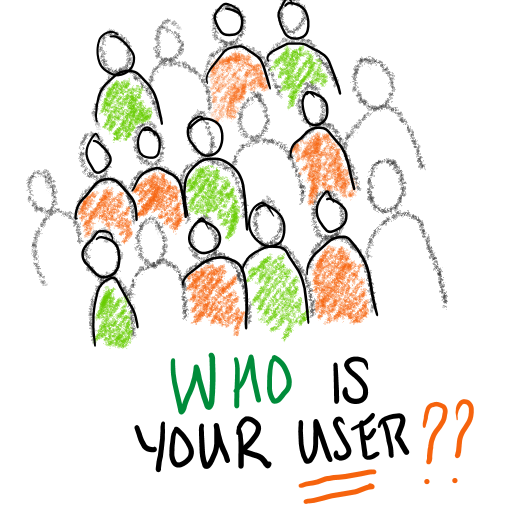 This step is where the most of your time and energy should go, even if you are short on time to deliver your personas the interview stage is not a step you can rush. Source as many users as you can that fit the brief you have identified in step 1.  I am neither young enough to be less than three years in to my career, nor am I lucky enough to be planning my retirement so without seeking out the stories of people who are it's likely I would have misrepresented them by making assumptions about their values and beliefs. Assumptions are the saboteur of a great persona, they should be avoided at all costs.

You should aim for at least 5 interviews for each persona you want to create. However it's a chicken and egg scenario because you might find during your interviews that another character has emerged that you hadn't identified in the data - I told you assumptions are your enemy! - so be prepared to pivot your characters based on what your users are telling you.

Tips for a successful interview:

Very quickly within your interviews themes will start to emerge. If you are lucky enough to be working as part of a design team - I highly recommend this - then test your thinking with the team, re-tell stories from the interview and start to segment your users based on common values or attitudes. 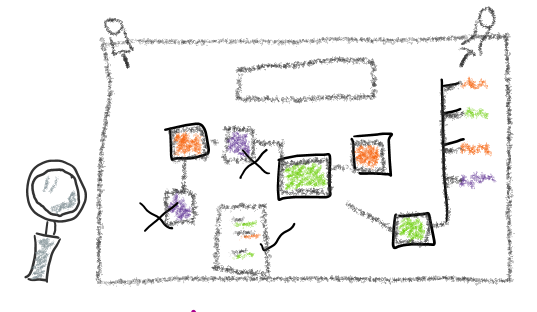 Dodge the pitfalls of demographics by setting them aside to begin with. In my research with NHS staff I had two spookily similar interviews, both qualified less than two years, both extremely ambitious, wanted to stretch their skills and had a clear idea of where they wanted to specialise, both wanted to study for a Masters degree and unfortunately neither reported having a supportive line manager. Outside of work they were both getting married soon and considering starting a family. The sound pretty similar don't they?

When we start to look at their demographics though there was 12 years age difference, one identified as male and the other identified as female, one was heterosexual and the other gay, one lived in a coastal town, the other a big city. You see how they're starting to sound like chalk and cheese now? But for our work the important characteristics of their experiences of work were so similar which means the likely solution to retain these two staff was also similar.

Time to start writing and just like pancakes the first one will probably be bad, but that's ok. Creating a persona is an iterative and experimental process so start by deciding your headings then slowly develop each one until you have a believable story for each character.

Suggested headings for your persona:

It's ok to have demographics in mind as you write but I would suggest adding these last, get the persons story right and their identity will emerge.

Step 5: Select an image for each persona

Largely speaking, humans are visual creatures and even as babies we're drawn to faces so selecting the right image to represent your characters is essential. Using real people is an option but do get permission to use their face to represent your character. Illustrations avoid the need for permission but they will need to feel real to be believable, anything that looks too much like a cartoon might distract the users of your personas. A final option would be to use a computer generated image from a website such as this person does not exist - a clever tool that creates faces, just hit F5 to refresh until you find your character.

The image should look authentic so avoid anything heavily photoshopped or a photo on a green screen with the Tokyo sky line as they are likely to trigger a subconscious distrust. Equally, avoid unnecessary distraction in the photos such as a famous actor or someone with a parrot on their shoulder - this returns me to my earlier point about assumptions, when I said parrot you thought of a pirate didn't you? And if I call the persona "Johnny" or "Jack" does that make your assumptions better or worse? A great image should be relatable and believable so do you best then test, test, test!

This step takes bravery, sharing your personas with strangers will open you up to criticism and you need to be prepared for it. My top tip is to share the personas with the group in advance to give people time to read them and form their opinion privately rather than in the group setting. Then have someone else lead a facilitated session to discuss what the group like and don't like about your characters. Observe this session but resist the urge to jump in with "I think you may have misunderstood Johnny", if it seems as though the group don't understand "Johnny" then it's probably time to reframe his story. 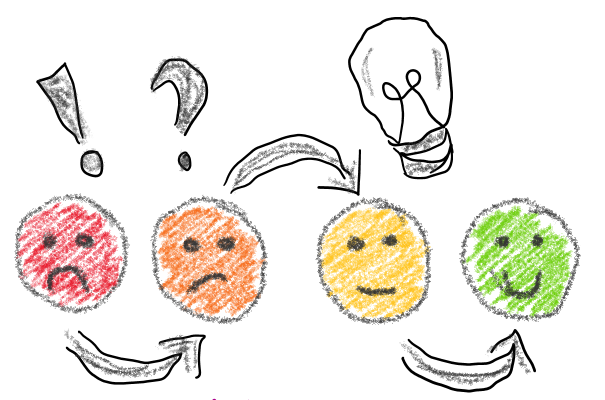 Much like the interviews, use a semi-structured style with your test group and ask open questions first then delve a little deeper. Some sample questions could be:

This last question is crucial, for the NHS retention personas I asked "how realistic is it that we could retain this person in the NHS workforce?" and for one of the characters the group response was "we don't think we can". I had to swallow my pride and acknowledge that the story I had created was too defeatist, it's not about sugar coating the reality of the situation, your characters still need to be honest but they should also be hopeful. The story needed softening so that line managers could see a way to support the person to stay.

Step 7: Get ready for launch

You'll spend a few hours revising and refining your personas following user testing, if you have time in your project schedule to run the revisions through another round of testing then that's helpful but if you're pushed for time then enlist some "critical friends" from your design team or wider organisation. I had an incredibly useful meeting with an NHS leader in Equality, Diversity and Inclusion who helped to rephrase some of the language to more authentically portray the personas, for instance allowing the characters to self identify; "Johnny" is much more likely to say "I am gay" rather than "I am homosexual". I cannot stress how important it is to seek out diverse views when developing your personas, the more you challenge your own thinking the less likely you are to fall in to the assumptions and bias trap.

So now it's time to release your personas - that by now feel like members of your family - out in to the world. Using a workshop to launch them is ideal, you can talk your group through the rigorous development process and the intended use of these characters but then it's over to them. Trust that if you've crafted authentic characters with convincing stories then the line managers, developers or sales teams using your personas will soon be saying "I wonder what Johnny would think" 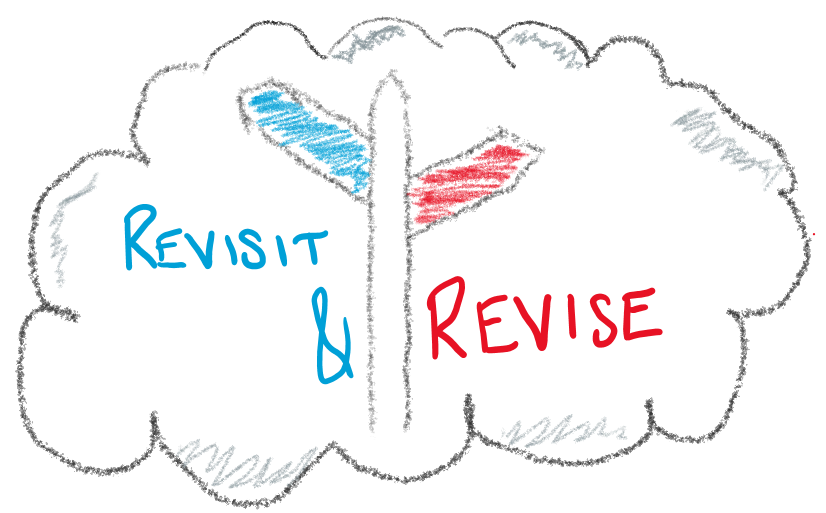 The work isn't over once you've launched the personas, they will need to be revisited to keep them fresh and useful. The frequency with which you revise them will be down to the pace of change in your organisation or industry. Over time the teams using your personas will observe changes in their user/customer base so include them in your discussions for revision. Consider what changes might have happened for the users, conduct interviews of users similar to "Johnny" to let them tell you what has changed and what you can do to keep up. 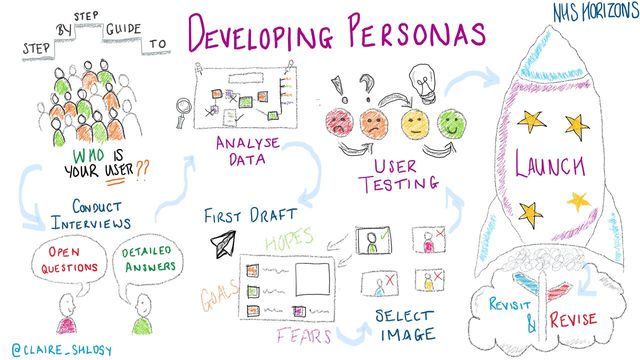 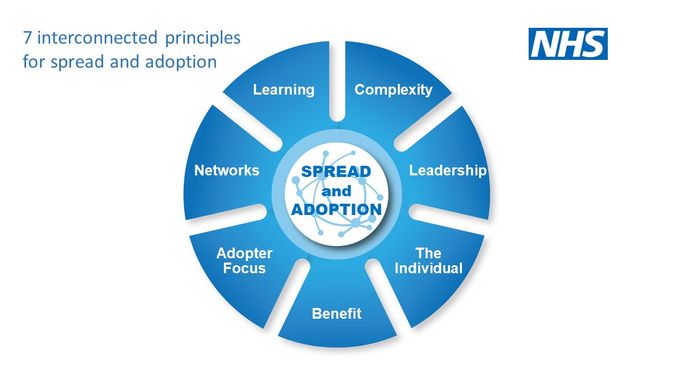