The reflections in the article this post links to about how the England football team use social media at the World Cup - and indeed whether they should be using at all - are similar to conversations about using Twitter health and care.

In some quarters reticence about using Twitter remains - is it a distraction, will it get me in to trouble, is anyone interested in what I have to say anyway, where do I start, what's the point? - are common questions.

There are many guides out there - including my 10 Tips for Social Media Success. Fundamentally, besides the obvious points about no bullying, trolling, or breaking confidentiality there is no 'right' or 'wrong' way to use social media.

The main point, as per the quote below, is to proactively use it so it's useful for you.

Anything in life has advantages and disadvantages, and Twitter is no exception. Twitter can be an incredible tool for learning, sharing, and building networks with people all over the world (replace 'fans' in the quote below with 'people', and it's relevant to us all). It can also be a lifeline for those who are lonely or isolated, offering friendship and support at all hours of the day and night. There are so many positives to be gained.

However, it can affect us negatively: we might spend too much time on it (who else has lost an evening to a 'quick check' that has turned in to reading links, and getting involved in conversations - not just me I'm sure!) and like all things we need to find a balance; sometimes we need a digital break.

Feedback we receive on Twitter can be negative, too. The England footballers are under a great deal of scrutiny, with every kick and pass very publicly analysed by professional and armchair pundits alike. Our health and care services are quite rightly under constant scrutiny, not only by regulators but by those who use the services too.

The footballers in the article describe using social media negativity as 'fuel' - we in health and care can also use feedback to know where we are doing well and how we can improve.

Twitter can give services valuable intelligence about people's experience of using it. This is especially useful considering there are many people who might not use the traditional feedback processes. When people talk about their experiences with a service, whether directly or indirectly, the service then has the opportunity to engage and have a conversation. Obviously there are many caveats, such as confidentiality with having a conversation on an open platform. For many instances though Twitter gives services the opportunity to be responsive, breaking down barriers and enabling more conversations.

I did this regularly when I was the communications manager for a hospital trust. One particular example was when someone tweeted that they were coming to the hospital for an endoscopy - unsurprisingly, they were nervous and not looking forward to it. I sent them good wishes: after the procedure, they replied saying it all went well, and said how kind and helpful the staff were, giving the hospital feedback it might not have otherwise received. In other instances where there was negative feedback, I was able to engage with an individual and put them in touch with the relevant member of staff - sometimes all that is needed is a conversation, and other times it enabled a formal complaint process to start.

Any opportunity to learn from the experiences of people who use health and care services is valuable.

On Twitter there is often lively conversation about all kinds of issues relating to health and care - the conversations can get emotive, and heated. We as individuals can be adversely affected if we receive negative feedback. Sometimes we might send a clumsily-worded tweet (it's always worth taking a moment before pressing 'tweet' to reflect on what you are saying). With the best will in the world though, there can be misunderstandings especially with limited space within a tweet, and without the benefit of tone and body language. Disagreements happen to us all, and are fine as long as they are part of constructive debate that helps us learn and see other people's points of view. Try to remember point 9 - be kind, never say on Twitter what you wouldn't say to someone's face, and never tweet while angry!

Just as with the footballers, there are no blanket rules on what works and what doesn't, and how you use it is down to the individual. Ultimately, by using Twitter proactively it can help far more than it hinders.

"However you manage it, it's about proactively knowing how to use it so it's useful for you... Useful could also be knowing how to engage with it, how to connect with fans..." 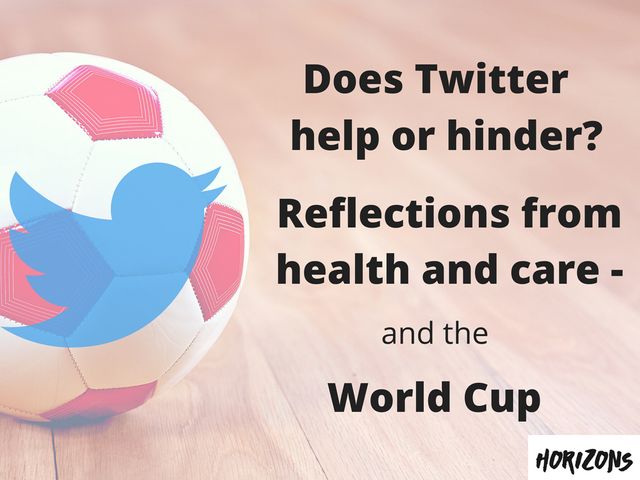 "Use negative comments as fuel"

How will social media affect the England squad? 📲

⚽ How do the England squad stay focused and motivated for a month without any home comforts or familiarity? ⚽ #WorldCupRussia2018 #ThreeLions https://t.co/ezXfVjGyZH