I would like to share an incident I experienced as a BAME (Black, Asian, Minority, Ethnic) Lead carer that would not have happened if I did not fit into this category.

I had worked in the care sector for a while and had just joined a new care home as a lead carer. I called into one of the residents' care rooms to assist her for her personal care. In the interest of confidentiality I will call the lady Mrs Smith. After entering Mrs Smith’s room and explaining why I had been called into her room, she replied “I want my kind to help me out of bed”.

Without registering what Mrs Smith had said and meant, I continued to explain what had been agreed by her care plan whilst thinking about how she wanted to be supported, again quite abruptly she replied “I want my kind to help me”.

At this point I then truly understood what Mrs Smith was implying; in plain talk she was not happy to be cared for by someone of BAME heritage and would have preferred someone Caucasian. I took her comment on the chin, but aware of the seriousness I alerted two of my colleagues and explained what had happened asking them to accompany me into the room in order to have witnesses to the incident.

On entering the room with my two colleagues Mrs Smith exclaimed, “I told you, I want my kind to help me out of bed”. My two colleagues were in shock after hearing what she had said, and tried to explain to Mrs Smith that her comment was completely inappropriate. I knelt by Mrs Smith’s bed and in a firm but calm voice explained that I was the only one on the shift that would assist her out of her bed and that if she continued insisting that she wanted “her kind” to get her out of bed we would have to inform her family and they could help her out of bed that day.

By this time my manager had been informed and spoke to Mrs Smith, who then agreed to allow me to provide her care as long as it was done the way she preferred. I made sure that I engaged with Mrs Smith with dignity and respect and was considerate of her agreed care plan.

After this incident I found out from Black African staff members that most mornings Mrs Smith was wet in her bed because when they would come into her room in the night to assist her she would always refuse assistance from members of staff who were black.

I insisted that Mrs Smith’s behaviour needed to be addressed by the manager of the care home. I explained my concerns of risks of pressures sores for Mrs Smith to my manager, as she was often wet most morning as she would not accept care and support when there were black members of staff working and this had been going on for a long time before I was working there.

In addition to this, the staff members were not there to be insulted or discriminated against.

The care home manager shared the same concerns as I and called her family in to a meeting. Once in the meeting Mrs Smith again expressed that she wanted to be cared for by her “kind” to the surprise and embarrassment of her daughters and son-in-law. I explained again in a calm and friendly manner that the care home had both black and white members of staff and if she was not happy with this arrangement then this care home might not the best place for her to reside in. I further explained that we were happy to serve her and her family six weeks’ notice to find another care home.

I believe it was at this point that Mrs Smith realised the seriousness of her behaviour and what she could lose because of it. It was also made clear through the meeting that Mrs Smith's daughter and son-in-law were mortified by her behaviour and they asked to speak to her privately. We also called a staff meeting to make everyone aware of the incident and conclusions that were made, I encouraged other staff members to ensure that despite her comments she was provided with the same level of care expected in her care plan and that if anything came up to report it to me.

The following morning Mrs Smith apologised for her behaviour and became comfortable with all staff members helping her.

Since this day, Mrs Smith had changed her views completely. If I took Mrs Smith to the dining area for lunch she would wait for me to take her back; even if other staff members offered, she was happy to wait for me. My relationship with Mrs Smith developed to be the best relationship - she also became increasingly open with me explaining how she went to Sunday School as a child and interesting stories about her life and experiences.

In reflection, I very much understood Mrs Smith because I realised that her comments were intertwined with a different generation of thinking. She did not see black people growing up and most likely did not understand the gravity of her comments. This motivated me to want to help and educate her rather than allow her to hold on to her misconceptions. She later apologised and explained that she knew she had behaved badly.

I think this story shows that people might not necessarily be aware of the impact of their comments and that reacting in a negative, aggressive or disrespectful way will only fuel the misconceptions. It’s important to educate and inform people about their misconceptions in a calm and respectful manner which ultimately leads to a better situation for both parties.

Caring and supporting vulnerable individuals is a vocation not a job. A passion that brings me fulfilment and I will recommend the profession to anyone who has the passion for it no matter the challenges it may bring.

In addition, I think this story highlights that you need to believe in yourself, know what is right and what is wrong and refuse to be intimidated by stigmatisation. As a BAME staff member I was able to create an impact by alerting my managers, and insisting that they would do something about this. If I was not adamant that something had to be done, it would not have been. I think that BAME staff members should have more faith in themselves to be able to make long-lasting impact in the work place. It is important for people responsible for diversity and inclusion to be supportive in situations as such; unfortunately in this case the manager initially laughed it off and had to be persuaded to take on the case more seriously.

This conversation has to be extended to those who influence diversity and inclusion in the workplace. We're aiming to do this at an event on 14th June as part of the transforming perceptions of nursing and midwifery programme, something we aim to do during the event on the 14th June. Click here and sign up, and my colleague Bev's post has more information about the event. 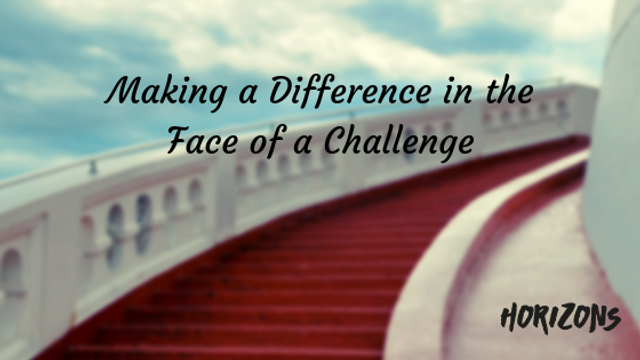 We Live in a Small World: The Importance of Empathy
Camilla Lindo
Recent posts from NHS Horizons Insights