What do you think is a factor in social media influence?

A high number of followers is one factor, as is a high rate of impressions - they are not the most important, though.

A word on followers and impressions:

An individual can have lots of followers because they are genuinely influential in their respective field. However, in some cases (whether on Twitter or Instagram) follower numbers can be misleading because followers can be bought - either with cold, hard cash or for things like following an account being a rule for entering a competition to win a prize.

Impressions tells you the number of times the tweet has shown up on someone's feed. As a rule of thumb, the more followers an individual has, the higher the impressions will be. What it doesn't tell you is whether anyone cares, or is interested in that tweet - or whether they even saw it, bearing in mind that there are times we scroll through our feeds mindlessly, or while doing something else.

(Impressions figures are more valuable to track things like hashtags, and over a period of time than for individual tweets).

Do you ever look at your social media engagement stats...or know how to do it? It's really easy!

At the time of writing, I have 7,120 Twitter followers - a relatively modest number. (Compare that to for example Horizons' Chief Transformation Officer Helen Bevan's 70,000 followers or to choose a random celebrity, Lady Gaga with 77.9 million followers.)

Below is a tweet I sent recently. You can see it's had one reply, 8 retweets, and 26 likes. Those are three measures of engagement. You can discover more data by clicking on the three vertical lines next to the 'like' (heart) symbol (this is available via the Twitter app on your phone, or the desktop version on your computer). 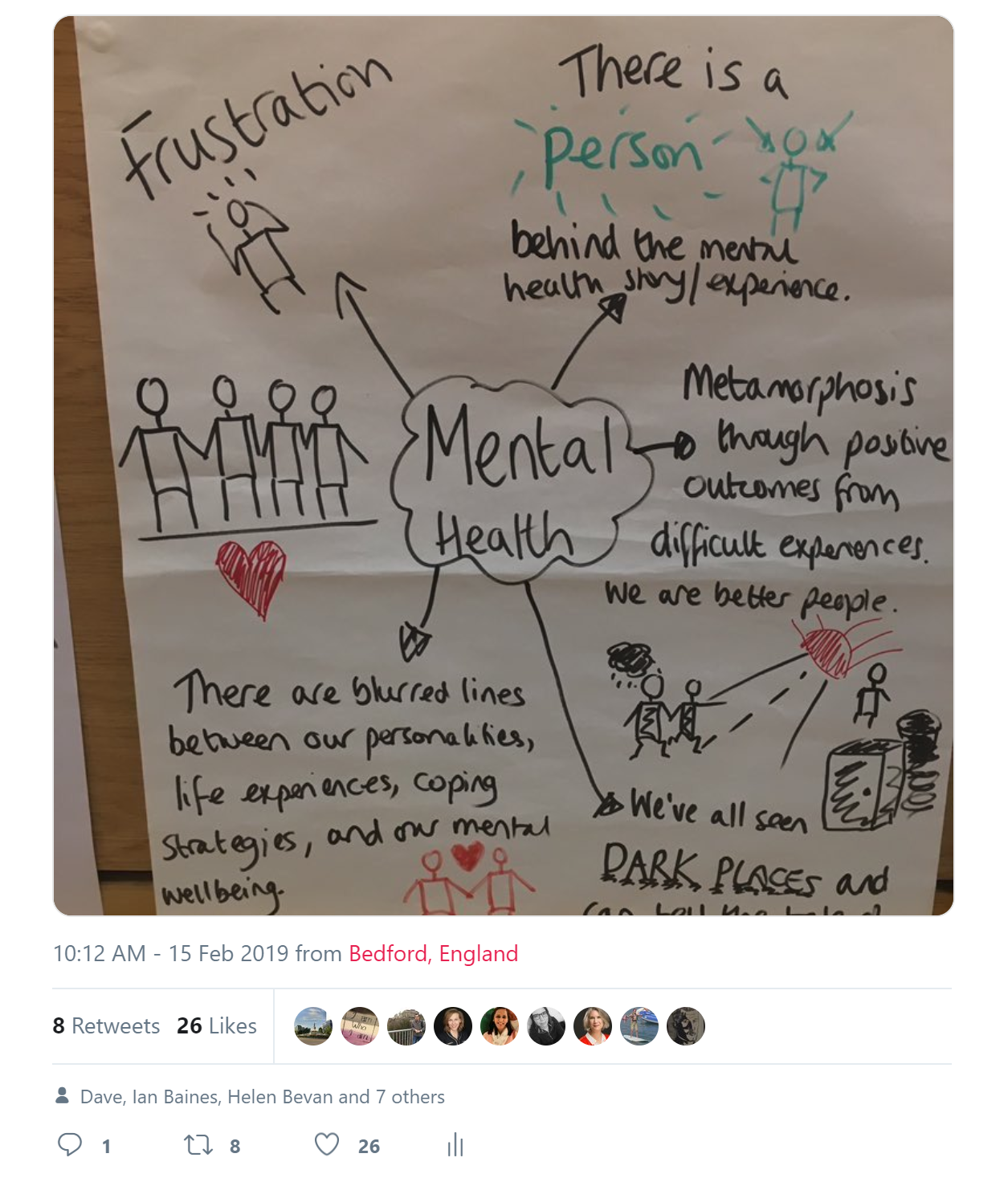 This is what will pop up when you click the three vertical lines: 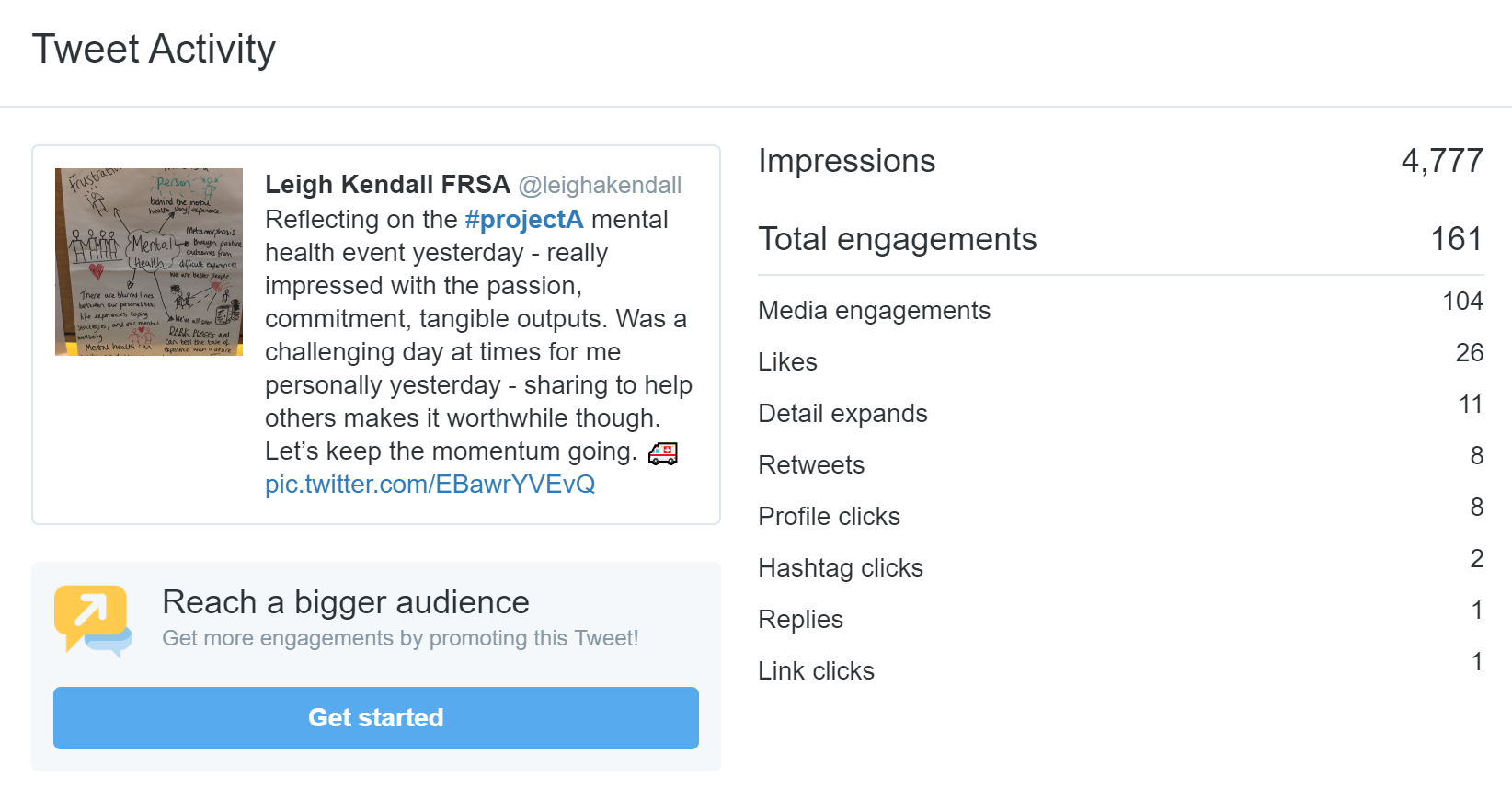 Engagement can be a range of activity - likes and retweets mean that people were interested enough to want to share your content with their own followers; while clicks on the hashtag, photo, and on my profile means they were curious (or maybe they were just nosy - either way, they took an action rather than scrolling on by).

If you're interested in seeing even more data, you can go in to your Twitter analytics (you need to do this on the desktop version of Twitter): 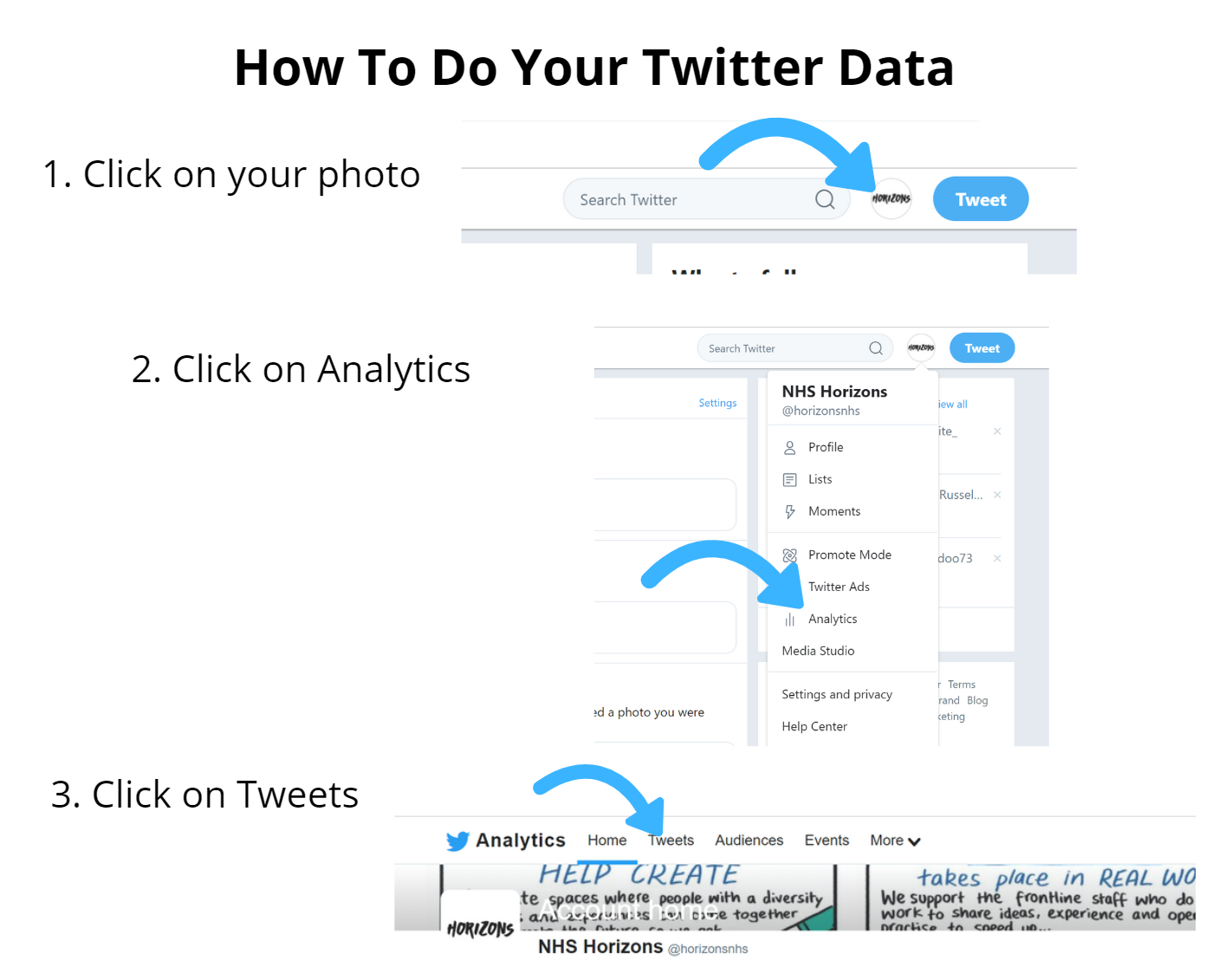 Thus gives you lots of insights about your Twitter activity. You'll see a range of charts and data for your account as a whole (either as individual months or for a time period of up to three months), and for individual tweets over a time period. Have an explore!

There are myriad posts offering advice for boosting your social media following, influence, and impact. There's guidance on the optimum wordcount; the best time of day to tweet; and the 'right' hashtags to include. It's worth following some of that advice (especially if you are running a campaign: insights such as the content that resonates the most with your intended audience, as well as the optimal times to post are crucial to a successful communication strategy). There's a big caveat: it's an inexact science, and no amount precisely crafted tweets, scheduled for the 'right' time can replace genuine interaction.

Trying to 'gamify' social media tends to be ineffective: just broadcasting is boring, while insincerity and inauthenticity is generally pretty obvious. That erodes trust, and trust is vital for influence. As elite influence expert Dan Connors says, there's a difference between influencing and manipulation.

Focus on building connections, networks, and relationships. That builds trust, and from trust comes influence.

As for me, I tweet things that I'm interested in, genuinely care about, and that I think the Twitter community will be interested in, too. I try to be authentic, interact with others, and be a generous partners (see the 10 Tips for Social Media Success). I aim to be human - and I see a good return on the investment in my time and effort.

...you should not care so much about how many followers you have, but how much they engage with you and your content...Each follower is a micro-influencer in their own right within their network. You must therefore earn their influence in order for them to share your content into their own network. Thereby validating what you have written/said into their own trusted network. And then it starts all over again. Each Like, Comment, Share or Retweet is the ROI you should be seeking. 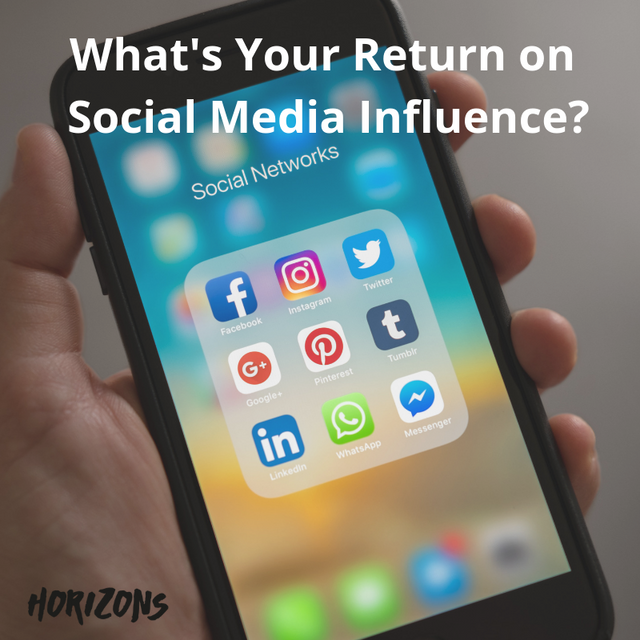 What’s your #SoMe ROI? Not Return on Investment but your Return on Influence. Think about how many likes, comments, shares, or retweets you get rather than your number of followers. Each Interaction is the ROI you should be seeking says @Timothy_Hughes https://t.co/oAgaPvdkU9 pic.twitter.com/Hhwvv71Ov6

Feeling tired and irritable? You're not alone - it's a natural part of a crisis response
Leigh Kendall
Recent posts from NHS Horizons Insights